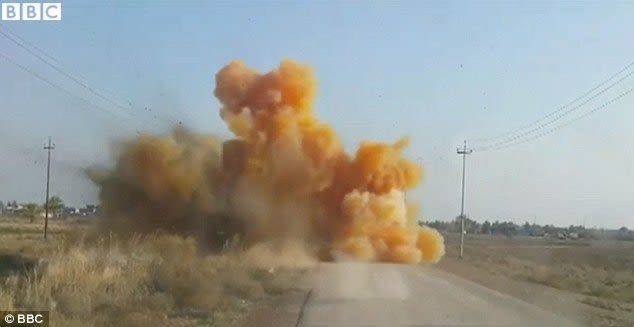 COVID-19 TIP #3 FOR HEALTH AND SAFETY

For disinfecting hard surfaces to get rid of Coronovirus, one option that the Center for Disease Control recommends is a bleach solution which you can make by mixing 5 tablespoons (1/3rd cup) bleach per gallon of water or 4 teaspoons bleach per quart of water.

WARNING! If you do decide to use bleach, NEVER mix it with ammonia!!

The combination of household ammonia and bleach produces dangerous chlorine gas which in high enough quantities, produces a greenish-yellow cloud that smells of bleach and immediately irritates the eyes, nose, lungs, and throat of those exposed to it. At high enough doses it kills by asphyxiation.

Chlorine gas is the same thing that the Germans used for chemical warfare in World War 1. The picture shown is of chlorine gas release by a roadside bomb detonated in Iraq in 2015.

On April 22, 1915, German forces shocked Allied soldiers along the western front by firing more than 150 tons of lethal chlorine gas against two French colonial divisions at Ypres, Belgium. This was the first major gas attack by the Germans, and it devastated the Allied line.

So be careful and stay healthy! Hope this helps!